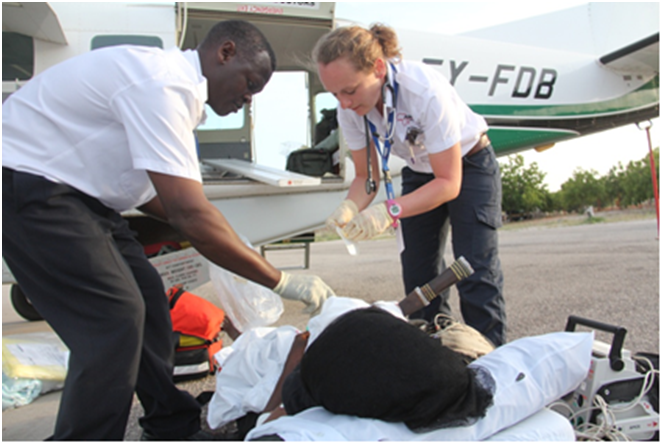 The knife appeared to have gone through her nasal cavity, with the blade missing her left eye narrowly. Doctors at Wajir recommended that she should be transferred to the better equipped Kenyatta National Referral Hospital where Fatuma could access the maxillofacial specialists.

On Thursday, 7th January 2016, a distress call came through the AMREF Flying Doctors Emergency Control Centre from a well-wisher in Khorof Harar Wajir. A domestic fight had turned awry when a husband stubbed the wife with a knife leaving it lodged deep in her face and her life in danger.

Fatuma was initially rushed to a local dispensary at Khorof Harar in Wajir for first aid and later to the Wajir District Referral Hospital. Here, doctors attempted to remove the knife, but opted to stop when they realised that it could lead to more bleeding that could suffocate and ultimately kill her.  The knife appeared to have gone through her nasal cavity, with the blade missing her left eye narrowly.

Consequently, the doctors recommended that she be transferred to the better equipped Kenyatta National Referral Hospital in Nairobi where Fatuma could get access to maxillofacial specialists.

Given her delicate medical condition and ficancial incapacity well-wishers and medics at the Wajir District Hospital requested AMREF Flying Doctors for a charity evacuation. Due to the delicate nature of the situation the team AMREF Flying Doctors took some time to prepare and ensure that everything that could be needed in flight was loaded to the aircraft.

At 3.30pm, the AMREF Flying Doctors team took off from Wilson airport aboard a Cessna Caravan to Wajir. The 2 hours flight was smooth with the medical team spending the time speculating over the Fatuma’s condition, posing different scenarios and strategising on how to tackle each one.

Upon reaching Wajir referral hospital, they found Fatuma in a critical condition with the knife still sticking out of her face.  According to the medical report, Fatuma was taken to the Wajir Referral hospital on Wednesday 6th at 2am with a knife to her face.  She arrived at the hospital nine hours after she the assault.

After the regular hand-over and stabilisation she was prepared for flight transfer to Nairobi.

A few minutes past 6pm, Ms Fatuma was wheeled into an AMREF Flying Doctors plane that would deliver her to Wilson Airport in Nairobi where an Advanced Life Support (ALS) ground ambulance was to take her to KNH.

As she was belted the flight to Nairobi, Ms Ibrahim remained motionless. Our medical team was confident that Ms Ibrahim will make it to the city safe. On Flight she was stabilized, given some painkillers and other drugs to prevent her from vomiting because should she get sick she might choke as her airway is compromised by the knife.

Ms Fatuma was successfully operated on at the Kenyatta National Hospital at about midnight and the knife removed from her cheek.