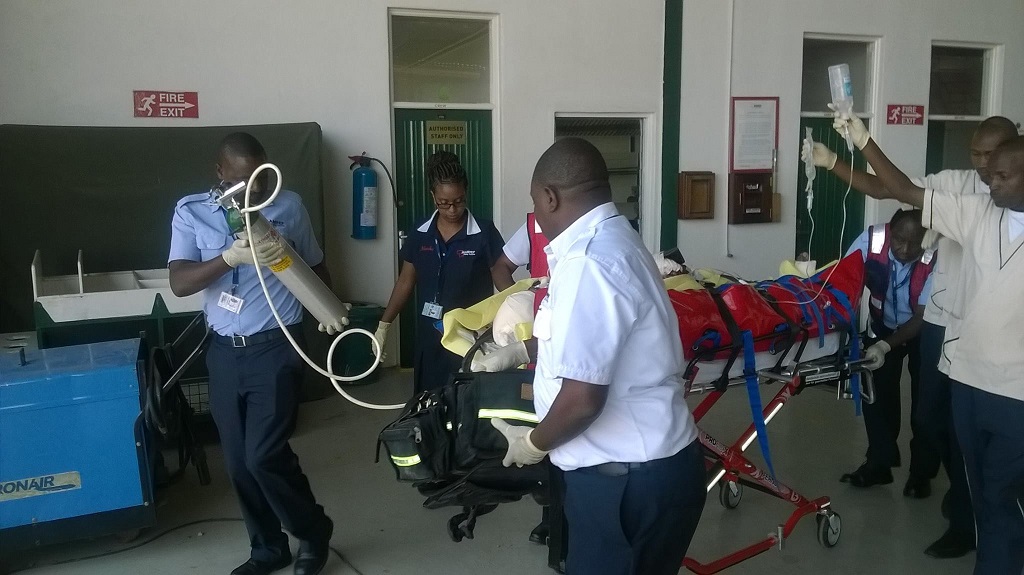 AMREF Flying Doctors this morning stepped in to save the lives of two occupants of a small plane that crush-landed inside the Nairobi National Park.  The two, an instructor and his student, were on a routine flying lesson when the aeroplane was forced to make the emergency landing at about 11:00AM.

At the AMREF Flying Doctors Hangar, a medical team comprising three (3) doctors and three (3) critical care nurses – led by CEO & Medical Director, Dr Bettina Vadera – was quickly assembled.  Working from a makeshift ‘hospital’ inside the hangar the team embarked on the process of stabilising the patients who were in a critical condition.

According to Dr Bettina Vadera, it was the fast decision of the rescue team to rush the injured to AMREF Flying Doctors facility that saved their lives.

“By the time we received the two patients they were already very critical with multiple injuries and severe blood loss.  It took my team, backed with the best of emergency equipment, about one hour to get them out of danger”, Said Dr Vadera.

The kind of injuries sustained by the casualties are life threatening and required highly trained emergency staff to limit further complications. All the casualties were very critical and required to be connected to our life support equipment for on ward transfer to the Hospital.

The two were then rushed to a local hospital in AMREF Flying Doctors Advanced Life Support (ALS) Ground Ambulances.