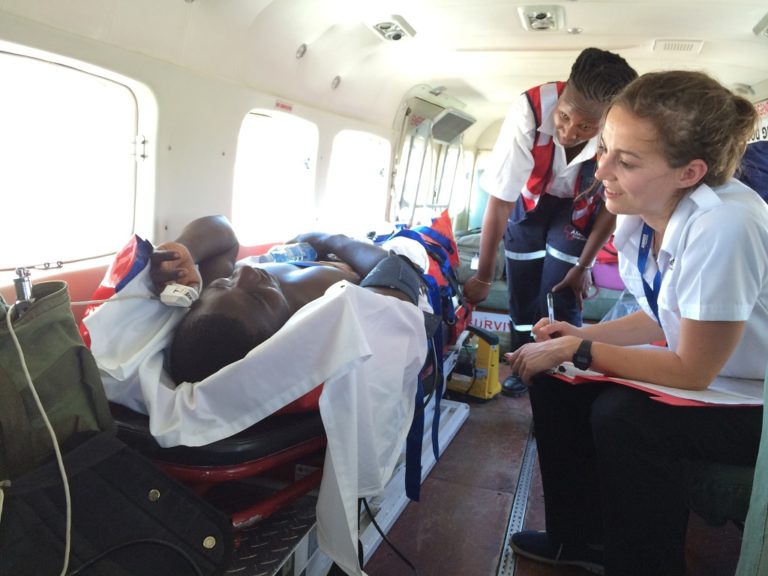 On Wednesday October 7, 2015 the medical team at AMREF Flying Doctors received a request to provide inter-county air transport for a 30 year old male with a spinal injury.

Mechanic, Christopher Oduor was working underneath a tractor the previous Saturday when the jack used to prop the vehicle up collapsed leaving Christopher trapped underneath.

Thanks to the collective effort of nearby colleagues Christopher was freed, however he did not escape the accident unscathed.

Preliminary x-rays taken in Lodwar District Hospital, where Christopher was admitted, showed he had sustained a severe fracture to his lumbar spine.  The magnitude and stability of the fracture was unclear.  It was possible Christopher may recover with conservative care and rest however, an unstable fracture could result in damage to the spinal cord and lead to paralysis.  Further specialist assessment was needed to determine the course of treatment.

Lodwar District Hospital is the only functional government hospital in the Turkana region.  While equipped to deal with many of the cases present, it has no capability or capacity to deal with such orthopaedic matters.  Transfer to Moi Teaching and Referral Hospital in Eldoret, 370kms away was the most sensible option for Christopher to receive the care he needed.

For a patient with a spinal injury travelling on Kenya’s bumpy road network was not an option.  After the request for a charity evacuation was put to AMREF Flying Doctors, arrangements were made to transfer Christopher to Eldoret by air.

Accompanied by a close colleague, Christopher was secured in a vacuum mattress to protect his spine and had his vital signs checked which were found to be within normal range.  He was not in pain after immobilization as he had received analgesics in Lodwar prior to transfer.  An ambulance from Moi Teaching and Referral hospital met the team at the Old Eldoret airport.  Our medical crew accompanied the patient to the hospital where they handed him over for treatment.