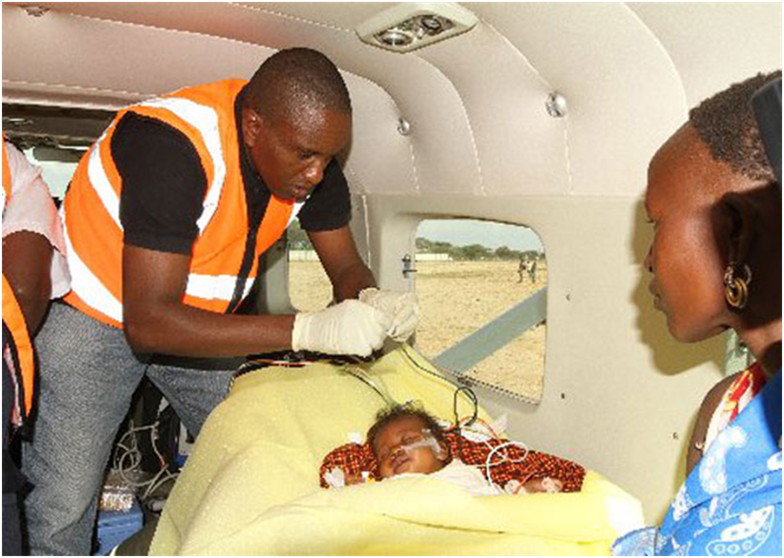 Wamba is a small town in the Samburu region of north central Kenya. It is located on the edge of the Mathews Range and near the Samburu National Reserve. Although Wamba is located on a dirt road, the main northbound road to the Ethiopian border is just a few miles away. Wamba is a semi-arid environment with unpredictable rainfall.

Medical facilities in Wamba are far, wide and ill-equipped – only able to offer basic health services despite serving the large population around it. Due to this, the baby was referred to Kenyatta National Hospital which is the largest referral hospital in East Africa, As Baby Mperesi and the parents could not come to Nairobi by road, air ambulance was the only safest means to transfer him to Nairobi.

On the afternoon of 18th June, AMREF Flying Doctors’ Cessna Caravan landed in the Wamba airstrip where the team received the patient. The patient was stabilized and immediately connected to the oxygen and monitoring machines. The team was soon airborne, heading back to Wilson Airport, Nairobi.

Immediately on touchdown in Nairobi, our Advanced Life Support ground ambulance was at hand to transport the patient to The Kenyatta National Hospital.

According to the father- Mr. Ebb, the baby was bitten by the snake nearly two weeks ago but they were not aware of it until his body began swelling.

“His leg became swollen and his mother massaged it, then one arm started swelling and then the next and soon, he would not breathe properly. That’s when we rushed him to Wamba Mission hospital before we were referred to Nairobi for specalised treatment,” he said.

However, it is not clear the type of snake involved or how the baby survived given how lethal some snake bites are.

“It is a miracle that he is doing better today and his breathing has stabilized. They are also giving him some painkillers. There are many snake attacks in Samburu and just last week, three snakes were killed in my homestead,” the father of 10 said.

AMREF Flying Doctors has since visited baby Mperesi. According to the attending doctor at Kenyatta National Hospital, the child would need at least three or four dialysis sessions to remove the accumulating waste in his body.

The baby will go through peritoneal dialysis where a catheter will be put in his stomach that will introduce a sterile cleansing fluid in his body to help filter the waste.

This is different from the normal dialysis where blood is pumped out of the body to an artificial kidney machine, and returned to one’s body by tubes that connect one to the machine, also called haemodialysis.

On Monday, a catheter was fixed to mechanically drain urine into a bag, but was only filling up with blood and thus the dialysis was urgently required. He has also been given anti-venom to neutralise the snake poison.

We are happy that patient is doing much better.