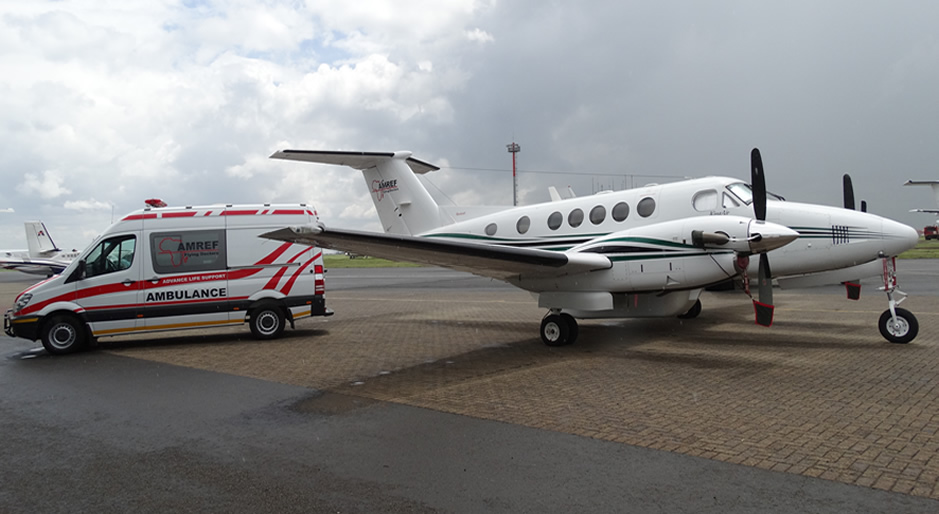 On the morning of 19th November 2016 , the AMREF Flying Doctors Control Centre received a distressed call from the medical Doctors in Moyale requesting urgent emergency aero medical evacuation of an infant born with congenital defect which resulted in his intestines being pushed outside of his tummy ( Gastroschisis)

Following a quick consultation within AMREF Flying Doctors management team on the case, we took off from Wilson Airport as soon as possible. This baby required specialized doctors and expertise which wasn’t available in Moyale District Hospital

After a 2hr 15 min flight the team landed at the Wajir airstrip. There was a quick transfer of the patients’ relevant medical records to the AMREF Flying Doctors medical team, after which the baby was moved from the vehicle into the aircraft for stabilization. The baby was wrapped in cling film to keep her organs close to her body and prevent infections.

She was then put in a neonatal transport incubator that is used for safe transport of extreme premature babies, preterm babies and full term newborn babies that require movement from one facility to another. This incubator provides mobile neonatal intensive care set up especially to critically ill neonates. The incubator is one of the latest incubator’s in the world market.

The team was thus airborne and after a relatively smooth flight during which the patient was carefully monitored the team landed back at Wilson Airport where an Advanced Life Support (ALS) ground ambulance was to take her to Kenyatta National Hospital.

Charity evacuations such as these are carried out free of charge. AMREF Flying Doctors is extremely appreciative of all those across the globe who fundraise for us so we can keep doing what we do best- saving lives.