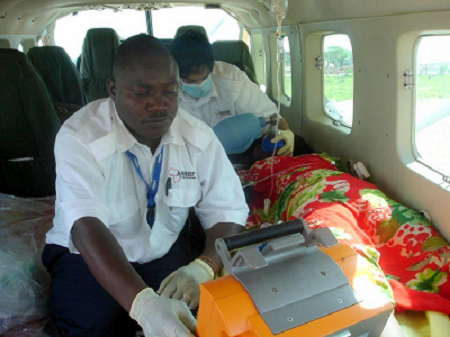 El Wak is a small town on the Somalia-Kenya border. The Kenyan portion is located in Mandera District

Their medical condition was well beyond the capacity of staff at El Wak Sub District Hospital District Hospital to handle. The first patient, Saadia 20 year old woman had developed respiratory problems one month after delivery, prompting her relatives to take her to the Hospital. The lady also had a severe infection that affected her breathing and kidney function.

The second patient, Habiba, 30yrs of age had just delivered her baby under the care of a traditional birth attendant. The baby was delivered alive and well but the mother kept loosing blood from her birth canal prompting her relatives to seek treatment at the Hospital. She had bled significantly and the Medical team at El Wak Sub District Hospital District Hospital had to transfuse 2 pints of blood to keep her alive.

AMREF Flying Doctors team arrived to the relief of both relatives and the local medical staff who had done all they could within their set up. The patients were brought to the airstrip in a pickup truck—the makeshift ambulance for this community.

Saadia was extremely emaciated, conscious but weak, she was stabilized and soon after lifted into the aircraft. The medical staff put her on a life support machine as she was very weak.

The team was soon airborne back to Nairobi and continued to monitor the vital signs of the two patients. Saadia got worse and the medical staff performed a cardiac compression and administered drugs to boost her heart condition.

At 1900 hours, the team landed at Wilson airport. The patients were taken to Kenyatta National Hospital Intensive Care Unit by our ground ambulance, where they are currently admitted.