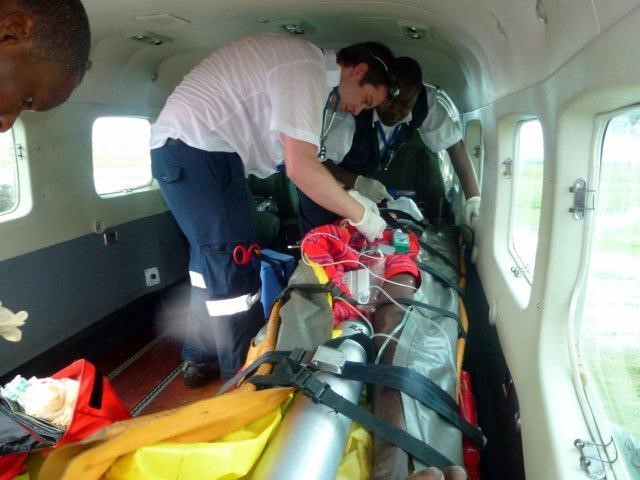 Maralal is a small hillside market town in northern Kenya, lying east of the Loroghi Plateau within the Samburu District. It is the administrative headquarters of the Samburu people. The town has an urban population of 16,281

On 15th August 2012, late afternoon, Amref Flying Doctors received a distress call from a good Samaritan who happened to have known AMREF Flying Doctors response to a similar emergency carried out at an earlier period.

The evacuation would be for two gentlemen who were travelling at the back of a lorry and sustained serious injuries when the driver of the lorry lost control causing the vehicle to veer off the road and overturn. This threw the passengers out of the wreck. Seven people were seriously injured in this accident and were taken to Maralal District Hospital. The two patients were critical and needed urgent transfer to Nairobi.

It was however late in the evening and the flight could not be conducted at night due to limitations of the airstrip. The medical team therefore reassured the caller that they will arrange to pick the patients the next day morning.

The following day, control Room called Maralal Hospital several times to get relevant details on the nature of injuries and the latest patient vital signs, which is part of standard procedure. This enables the medical crew to review the situation and thus plan for the evacuation aptly. However it was not possible to get a hold of the medical officer in charge until 11:00hrs.

Half an hour prior to take off, the flight operations office was informed by the medical team, that we would be evacuating the two patients. We got into action to do the necessary flight planning for the evacuation and by the time we were done with clearing the flight, both the medical team and flight crew were in the aircraft ready for take off. I joined them and we were airborne at 11:39hrs local time in one of the Amref Flying Doctor’s Cessna Caravan, suitable for the Maralal airstrip.

The medical team which consisted of Doctor James Milligan and Nurse Maurice Sijenyi discussed and planned for the action that needed to be taken when we landed in Maralal.

Within an hour of flight time we over the Maralal airstrip, but the Pilot in Command, Kefa Kihara, noticed animals grazing very close to the strip. Without delay he initiated a go-around procedure, a manoeuvre where the aircraft flies very close to the ground as if to land but takes off again instead. This scared the animals away as they would have posed a danger to the aircraft when landing and thus we were able to land safely.

The ambulance with the two patients from Maralal hospital was already at the airstrip awaiting our arrival and was surrounded by a crowd of curious on lookers. We disembarked and the medical team swung into action. They needed to examine the patients first so as to make the relevant medical decisions on the way forward. Both the patients were at the back of the ambulance, one on a stretcher and the critical one with blood and air trapped in the chest cavity, put on a flat bench, in a real desperate situation.

Once the patients were taken out of the ambulance and placed on the ground, in lieu of the injuries and thus the severe pains they were experiencing, the medical team had a quick review and began to administer pain relief medication. They then inserted a tube on the part with rib fractures to drain both air and blood out of the chest of one of the patients which improved his condition immediately. By this time it was pouring rain in Maralal and thus Doctor Milligan and Nurse Sijenyi, were performing these medical procedures under the wings of the aircraft while it rained on them. Though inconvenienced they we determined to continue giving care to the patients.

The second patient was loaded into the aircraft after enough pain relief and further immobilization of the limbs. We took off from Maralal at 14.00hrs and landed back to Nairobi at 14.56hrs. During the flight back the medical team continued to monitor the patient’s vital signs until we landed. At Wilson airport the patients were transferred from the aircraft to an Amref ground ambulance that took them to Kenyatta National Hospital. It arrived there at 15.30hrs and the patients were handed over to the Accident and Emergency Department.

They have been admitted and are now recuperating at the KNH Orthopaedic ward.