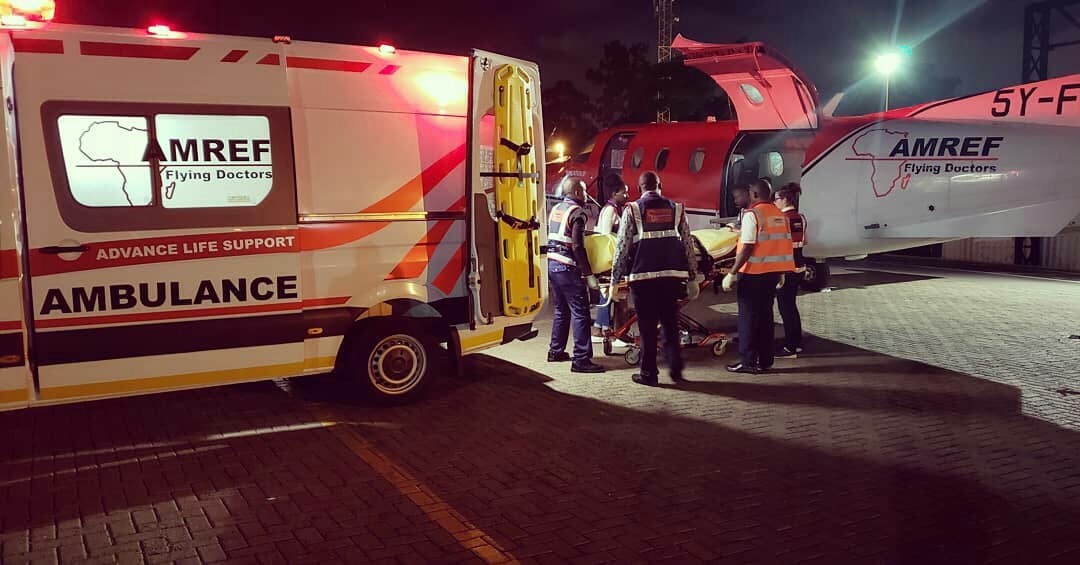 During the course of 2018 AMREF Flying Doctors undertook several charity evacuation missions. Among the missions was that of a 23-year-old lady from Mandera in Northern Kenya.  The young lady had been knocked by a bus and left unconscious – with a fractured femur – by the side of the road.

24 hours after the accident, we received a distress call from the medical facility where the lady had been admitted.  There was an urgent need to transfer the patient to Nairobi to manage her deteriorating condition. She could not afford the cost of air evacuation.

After routine and careful consideration, we activated the request and a plane was dispatched to Mandera for the evacuation.

We landed on a hot, dusty air strip in Mandera and headed straight for the hospital where we found the patient critically unwell. She was unresponsive with evidence of a head injury. She required a jaw thrust to maintain her airway and oxygen. She had a pelvic fracture and obvious left mid shaft femur fracture.

With the help of the hospital staff, the AMREF Flying Doctors team, embarked on optimising her condition and chances of survival.

At the airstrip, we treated her with treated with an anaesthetic, appropriately packaged with a pelvic binder (fashioned out of a sheet), and immobilised on a scoop for transfer. Our medical team ensured she had adequate pain relief, sedation and fluid. She was then loaded onto the aircraft and flown to Wilson Airport, Nairobi where they landed at 20:00.

As this was a charity mission there was some concern about securing an appropriate hospital bed. Thankfully, we received sponsorship for a bed at the Nairobi Women’s hospital and were able to hand the patient over to the hospital by 2100.

The young lady has since been discharged and reunited with her family in Mandera.

AMREF Flying Doctors is extremely appreciative of members of the community across the globe who continuously raise funds in support of the charity evacuation programme, so we can keep doing what we do best – saving lives, irrespective of who is who.
This evacuation was carried out at a cost of US$ 10,132

The inaugural Charity Golf Day tournament in 2018 helped to raise US$ 8029.00 towards the AMREF Flying Doctors Charity evacuation flights.