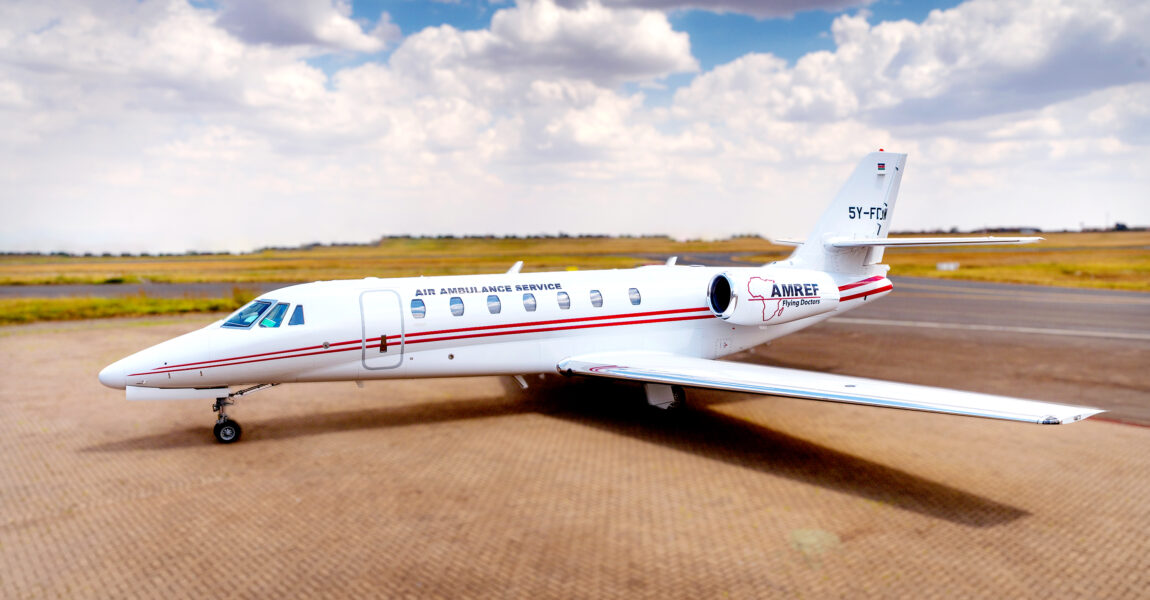 Kenya’s AMREF Flying Doctors (AFD) may add a second Cessna 680 Sovereign to their fleet in the next few years in line with their strategy to expand into one-stop long-haul destinations as far as China, the USA, and Australia, according to Chief Pilot Ephraim Murigu.

Speaking to ch-aviation at AFD’s base at Nairobi Wilson, Murigu said: “We are looking to expand into newer markets, to fly all the way to the US, all the way to Australia, and to grow our capacity to serve the African market from any point in Africa at competitive pricing for our clients”.

The immediate strategy in the next three years, he said, was to maximise AFD’s existing fixed-wing fleet, currently comprising:

AFD is a wholly-owned unit of Amref Health Africa, an NGO involved in medical-related humanitarian programmes with offices in more than 20 countries in Africa.

A leading provider of fixed-wing air ambulance services in Africa and boasting the biggest fixed-wing air-ambulance fleet on the continent, AFD was founded in 1957 by three reconstructive surgeons, Michael Wood, Archibald McIndoe, and Tom Rees. They started the flying doctor service providing mobile health and surgical support to mission hospitals in remote parts of East Africa. By the 1970s, the focus had shifted to community-based health care and the training of healthcare workers. The 1990s saw the organisation’s work expand to include disease control initiatives, focusing on malaria, HIV/AIDS and Tuberculosis.

From a fleet perspective, AFD acquired its first donor-funded Cessna (single turboprop) 208B Grand Caravan in 1996, in time adding two more of the type. The first long-range Cessna Citation 550 Bravo was flown in 2000 in partnership with a third-party provider. By 2013, AFD was able to invest in its own Beech (twin turboprop) Super King Air B200.

A turning point came in 2016 with the modernisation of the fleet. The Cessna Grand Caravans were sold and AFD acquired two Pilatus PC12s. With these, its reach was extended to West Africa, South Africa, and north to Egypt, Murigu explained.

In 2018, the decision was made to modernise the fleet again by acquiring even longer-range aircraft, resulting in the acquisition of the first air ambulance Citation XLS C560 jet. This enabled AFD to venture even further afield, to the Indian Ocean Islands, the mid-Atlantic Ocean island of Ascension Island, in addition to medevac missions to Europe and North America.

With the Covid-19 pandemic happening just after we acquired this asset (the Citation XLS C560), it actually provided us with a lot of versatility to offer solutions to clients, such as overcoming logistical nightmares of some countries not allowing night stops. With the jet, we were able to overcome some of those restrictions in certain countries, by dropping a patient and positioning to another country that was more favourable for layovers of our crews. Also, the demand for Covid patient transfers was high and with these aircraft we were able to serve that market very well.”

Murigu said the PC12’s dedicated medevac configuration – including a stretcher system enabling the transportation of two patients at a time and a cargo door facilitating the loading and offloading of patients – also came in handy during the pandemic.

In 2021, AFD acquired its first Cessna Citation Sovereign C680, which again enabled it to widen the market it served. “We’ve done missions from Africa to China, missions from Africa all the way to northern Europe – Stockholm, Denmark, Norway, Far East-Bali, Hong Kong and remote Indian Ocean Island, Maldives, Diego Carcia, Toku Island in Tonga. We were able now to work closely with partners in the US to repatriate patients all the way to anywhere in America,” Murigu said.