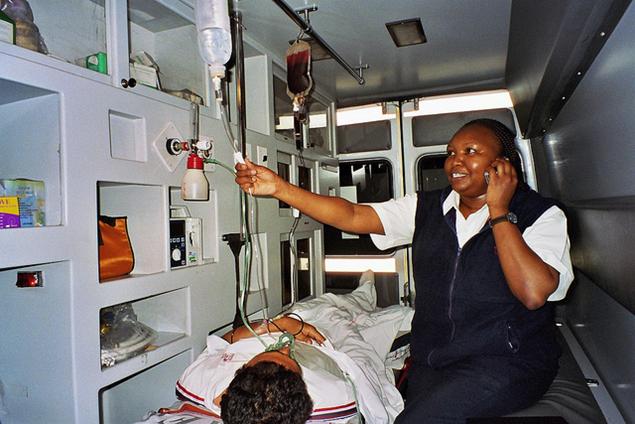 The first time I heard of AMREF was as a student nurse whilst visiting a relative who worked in the small Library at KCO at the time. In addition, for those who remember, there was a radio programme that featured a course for clinical officers called AMREF Doctor. My relative gave me a brief about the work of AMREF and the Flying Doctor Emergency Service and showed me the planes that were used to airlift patients at the time. They looked so tiny, but there and then I knew that when I grew up in the profession, this was a place that I would want to work at….after all, my relative also looked very happy working here so it must be an amazing place. My journey of a thousand miles had begun with this one step of self determination.

I had the chance to see these amazing FDES doctors and nurses at work, when they would wheel in critically ill patients into the ICU of the hospital I worked in…I had then progressed in my career having acquired Critical Care Nurse Training and therefore appreciated and acknowledged the skill and professionalism that exuded from the AMREF Flying Doctors(as it was later referred to) medical team. My desires to join them was finally realized in the late 90s, where I had the opportunity to work as a part-time/ locum nurse in the FDS control room, and appreciate first hand all the intricacies that were involved in the Air Ambulance industry. Apart from this and unimportant as it may sound, I also learnt a few skills like how to use a fax, communicate using emails, make a call using a satellite phone, hold a legible and clear conversation on the VHF radios (it all sounded like gibberish the first time I heard a radio communication in progress!), and how to make an International call.

At the turn of the new millennium, my dream was finally realized when I joined the service as an emergency flight nurse. I was mesmerized and excited about my new job…until I entered a Cessna Caravan plane to go and pick a critically ill patient with a bleeding aneurysm from Webuye and we had to fly at low altitude. It was the most turbulent flight I have ever had the chance to experience and let me say that one would have thought I was the patient! I was so airsick in the aircraft; I wanted to tender my resignation there and then! This was not what I had envisioned. A few more flights later in this same plane, and it became my best work station because of the space.  I even flew to Kitale once in a much smaller aircraft, (a Cessna 206) with only enough space for the patient on the stretcher, the pilot and myself, nothing more! I prayed all the way that we would not flip and find ourselves belly up in the sky!

FDS began to grow in leaps and bounds and in partnership with Phoenix Aviation we carried out International Air Ambulance Evacuations in the Citation jets. We had taken off to becoming an organization of International repute. I too was the envy of my family and friends as I had become an International traveller and there was always the naive pride of telling them where my next destination would be. My first International evacuation was from Mombasa to Johannesburg. If I had the chance, I would have taken a ‘kaselfie’ and ‘sambazad’ it to all in my social group….problem is, that this technology had not yet been incorporated in the mobile phones at the time or maybe it was just my phone a Nokia3310!  However, at least we had the digital cameras to help with capturing these memories.

AFD has offered me a conducive environment to enhance my professional development and acquire training both locally and internationally. Soon after completing my Bachelors Degree in Nursing, I was promoted to an Aeromedical Coordinator even though still feeling that I was too junior for such a post at the time. I however exerted myself and contributed towards the development of working teams, engaged in trainings, being part of the team that developed the training manuals we use for our First Aid/ BLS courses today, as well as developing work related guidelines and policies. Today, I am the Head Nurse in our emergency department and a mentor to my direct reports.

My journey at AFD has brought with it, exposure to so much; the beauty and potential of this country Kenya; it has exposed me to the vastness of the African Continent and given me the appreciation that indeed we are living in a global village. It has given me opportunity to see destinations that I would never imagine myself in and facing for example, the bitter cold winter of Europe, or the sunny weather and sandy beaches of Canary Islands, or standing out like a sore thumb in a city in China (whose name is a tongue twister) as it was probably a while since a chocolate coloured African visited in a long time. These trips (where we usually get a few hours of rest after delivering our patients to hospital or home) gave and continue to give me an appreciation of not only how much AFD compares with other International Partners in the same business, but more so how much potential we have back here in Kenya only if we had good governance and proper apportioning of the available resources. I have come to appreciate that AFD is indeed and truly an African business company of International repute with professionals who have attained skills and continue to offer a very professional service.

My journey has given me the privilege to offer medical care to the high and mighty in society as well as to the not so big clients like an 850gms preterm baby. Being called upon to evacuate my overall boss, Dr. Bettina Vadera for further treatment to Europe following a riding accident, was not only honourable, but a test for we the medical and flight crew. We know now that we lived up to her high expectations of the service! There have been very happy and sometimes sad moments in my line of work. I have participated in evacuations of mass accident patients, the Busia Plane crash, the Loreto Msongari and Kisii bus crashes and the Westgate and Garissa University terrorist attacks still fresh on my mind to date. Mogadishu was a regular destination where we evacuated and continue to airlift brave men and women fighting to keep terrorism at bay. Losing a patient in death and especially children is always devastating not only for the family members but for us the medical and flight crew.  The experience leaves us drained both physically and emotionally. We always have to debrief and get some psychological relief.

To this day, the charity evacuations that AFD carries out remain my most memorable and rewarding. Every time we would receive a radio call from Loyengalani, Dukana, Habaswein or Ileret to provide a charity evacuation of a mother in obstructed labour, I somehow usually ended up on that flight. The emotions that ran through me as I received these young pregnant women of ages ranging from 9 to 15years(having walked 3 days to get to a health centre only to be told that nothing could be done as the facilities did not have any resources) always gave me the determination to stay on at AFD. There was nothing more exhilarating than to receive updates on radio a few hours later, that the young mothers had delivered live babies through caesarean section at the mission hospital we often flew them to. The long and tiresome bumpy rides to pick them up would seem so inconsequential at that moment.  God was surely merciful and gracious to these young mothers. My goriest encounter was to evacuate a Samburu man who had been attacked by a lion but managed to fight it off only to be attacked again by hyenas. How unlucky can one be? These beasts almost left him faceless before he was rescued. Sadly he succumbed to his injuries a few days later.

Since becoming a Business Company, AFD continues to be a fast paced and forward progressing outfit growing from strength to strength.  It gets hard to be sloppy or trail behind on the job and this pace keeps me energized, upbeat, forward thinking and renews my strength. We have became more dynamic and through the able leadership of our CEO/Medical Director we continue to do a lot of regional and international  flying, building a name for ourselves both locally and internationally. Being granted the Best Air Ambulance Provider Award twice is no mean feat. We continue to not only offer Air Ambulance Evacuation and Commercial Airline escort services, but have set ourselves up as a credible and reliable Medical Assistance Service provider, a provider of an air ambulance subscription cover through our Maisha Product. We are a reputable training institution, in addition to all other services that we provide including providing medical standbys. This is all made possible through the amazing team here at AFD of which I am proud to be a part of. It is not uncommon knowledge that we sometimes spend many hours away from our families and loved ones while working here at AFD, but one thing I know is that I will have many amazing stories to share with my daughter when she is a little older to understand and comprehend. Despite these many work hours, I have taught myself to learn how to maintain a work life balance.

To borrow from a song we sang back in the day, “There is no stopping us, there’s no stopping, no one does it better”, I salute the leadership and colleagues of this amazing company and the entire AMREF Health Africa Family. When I finally hang my boots some day, I will look back with pride at having worked in such an enterprising place and providing an essential service to mankind.