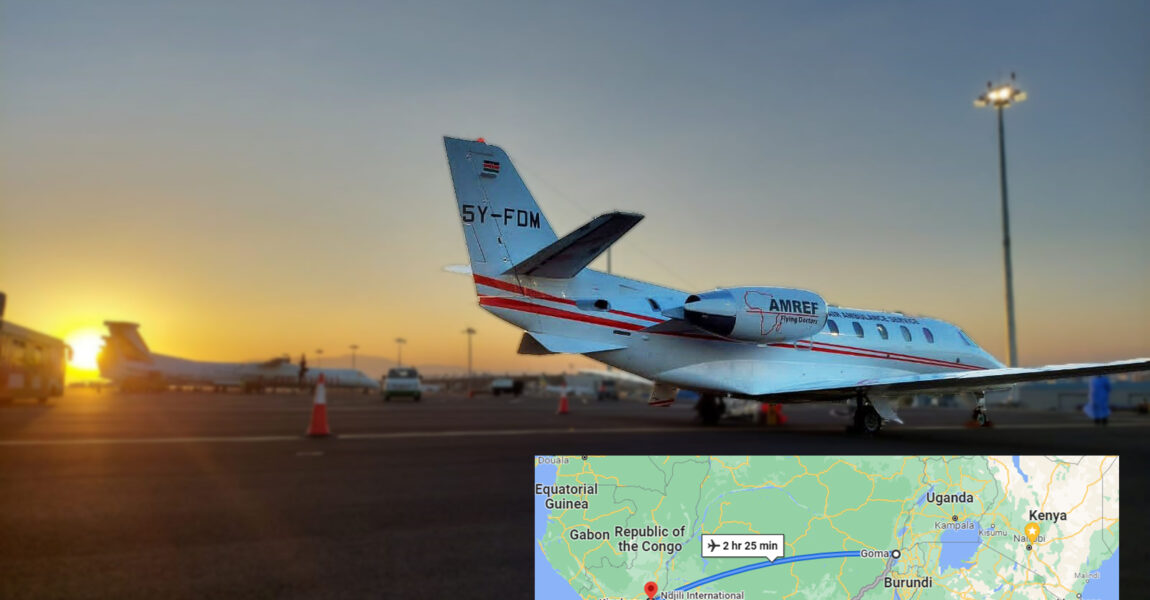 Malaria has long been seen as a serious threat to humanity, accounting for the majority of illness and death among new-borns and children in Sub-Saharan Africa. According to the World Health Organization (WHO), over 260,000 African children under the age of five dying of Malaria each year.

Nearly half of the world’s population lives in malaria-risk zones. The World Health Organization’s (WHO) rollout of the RTS, S/AS01 (trade name Mosquirix) Malaria vaccine on October 6, 2021, which will be administered in four doses beginning at the age of five months, which will help to further reduce severe malaria cases, especially in Africa.

In November, AMREF Flying Doctors was requested to evacuate a patient with severe Malaria from Goma to Kinshasa for specialised treatment.

Malaria requires prompt and optimal treatment. As a result, as soon as we received the patient’s medical report from the treating hospital, we began preparing for the flight. We obtained all the necessary permits in a timely manner and we were set for the medevac.

The distance between Goma and Kinshasa is approximately 2,479 kilometres, which would take a ground ambulance 50 hours and an aircraft two and half hours.

The crew landed at Goma Airport two hours after taking off from Nairobi. The patient was stabilized for transfer to Kinshasa. After the AMREF Flying Doctors’ air ambulance landed at Kinshasa Airport, we successfully handed over the patient to the receiving hospital for their care.

The short-field jets help us run our operations especially within Africa where we are presented with numerous unpaved small remote airstrips. On the other hand, the long-range jets help us run operations on long-distance in and out of Africa. Our fleet of aircraft are pressurized for the comfort and safety of not only the medics and crew but also the patient.

In response to the increasing demand for domestic and international air medical evacuation, we added a long-range medevac capacity of the Cessna Citation Sovereign 680 aircraft to our fully-owned fleet. This jet will help to expand AMREF Flying Doctors’ aviation capability and capacity to support international, long-distance air ambulance operations.