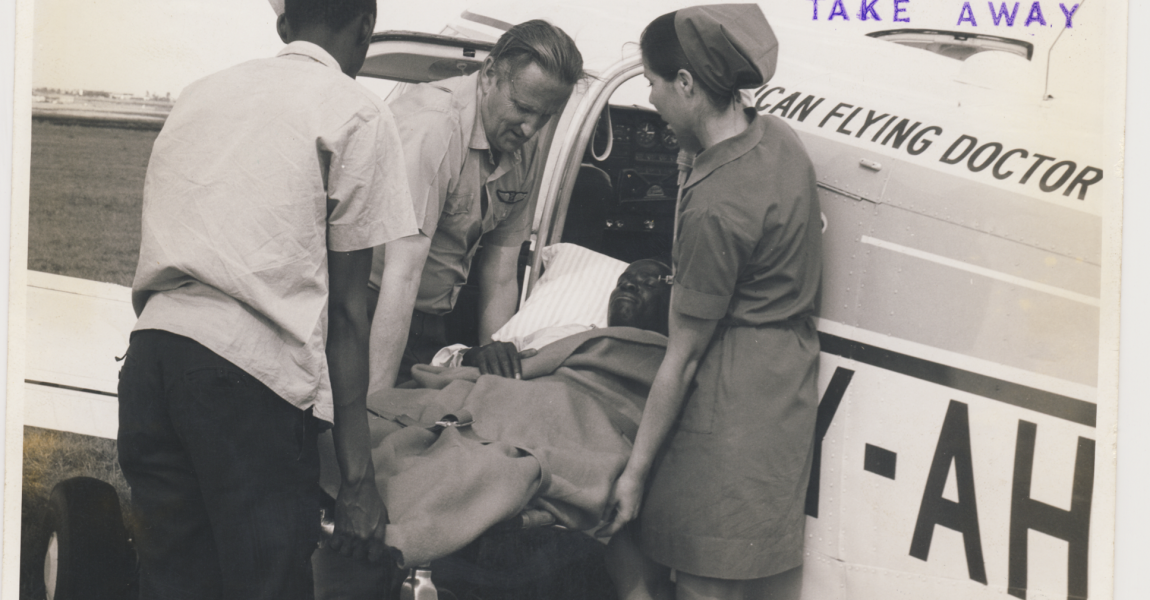 Lifting off from runway 14 at Wilson Airport Nairobi on a day in July 2017 in one of AMREF Flying Doctors’ PC12 aircraft on another emergency medical evacuation mission, it is interesting to reflect on how 60 years ago, Sir Michael Wood was taking the same course but in a much smaller, slower Piper Tri-Pacer aeroplane.

Michael was one of AMREF Flying Doctors’ three founders. Sir Archibald McIndoe, a New Zealander, famous for his successful pioneering techniques in reconstructive surgery on the Battle of Britain pilots during the Second World War and the creation of his Guinea Pig Club, was another founder of AMREF. Archie, as he was fondly known, co-owned the farm next door to Michael Wood on the slopes of Mt Kilimanjaro. The third founder was Tom Rees, also a brilliant reconstructive surgeon from the US and a former pupil of Archie’s.

It was in 1957, when the three men discovered that 75 per cent of all the children they consulted in the region suffered from burns mostly incurred in domestic accidents, that they decided to make their surgical and reconstructive skills available to help these and many others who suffered similarly and lived in the region’s remote rural areas. From this ‘meeting of minds’ of three selfless, extremely skilled surgeons, AMREF Flying Doctors (AFD) was born.

Since then Amref Health Africa – AMREF Flying Doctors’ parent organisation – has expanded its scope to improve healthcare for populations in many countries in Africa. At the same time, AMREF Flying Doctors has grown from the original outreach flights that brought ambulance service that now evacuates thousands of patients from and to destinations all over the globe.

specialist surgical skills to remote hospitals in the East African region, into a world class air From a budget of $14,000 60 years ago, AMREF Flying Doctors has developed into a company with an annual budget of $15 million. Funds generated by AFD’s commercial operations help finance Amref Health Africa’s Medical Outreach Programme, as well as charity evacuation flights and play a vital role in supporting Amref Health Africa achieve its ongoing mission of lasting health change in Africa.

Apart from its international air ambulance services, AMREF Flying Doctors operates a successful membership scheme under the Swahili name MAISHA (meaning ‘LIFE’), which gives its members free aeromedical evacuation services from the region to Nairobi. Over 100,000 annual members have subscribed to this life-saving service to date, and more than 80,000 members per year are on temporary cover.

Over the years, AMREF Flying Doctors has attracted the attention of a wide circle of international VIPs, including European royalty (the UK’s Prince Charles, Holland’s King Willem-Alexander, the Swedish King, the Danish Queen), film celebrities (Robert Redford, Meryl Streep and Paul Newman) and many others.

AFD’s history would be incomplete without acknowledging the lifetime’s work of the legendary Dr Anne Spoerry, the pilot doctor who started AMREF’s Medicine by Air programme to Northern Kenya, the Lamu Coast as well as the Magadi district in 1964. Anne (Mama Daktari as she was affectionately known) continued with AMREF as both pilot and doctor until she passed away in 1999 at the age of 80.

Sixty years after the Tri-Pacer’s first flight, the mission of the three Founders to take medical care to Africa’s people in remote areas remains, although if Archie, Michael and Tom were alive today they would find the dreams they had on the slopes of Kilimanjaro transformed beyond their wildest imagination. AMREF Flying Doctors and its parent organisation Amref Health Africa have become through their humanitarian focus and efforts, the leading, internationally recognised healthcare and air ambulance providers in Africa.