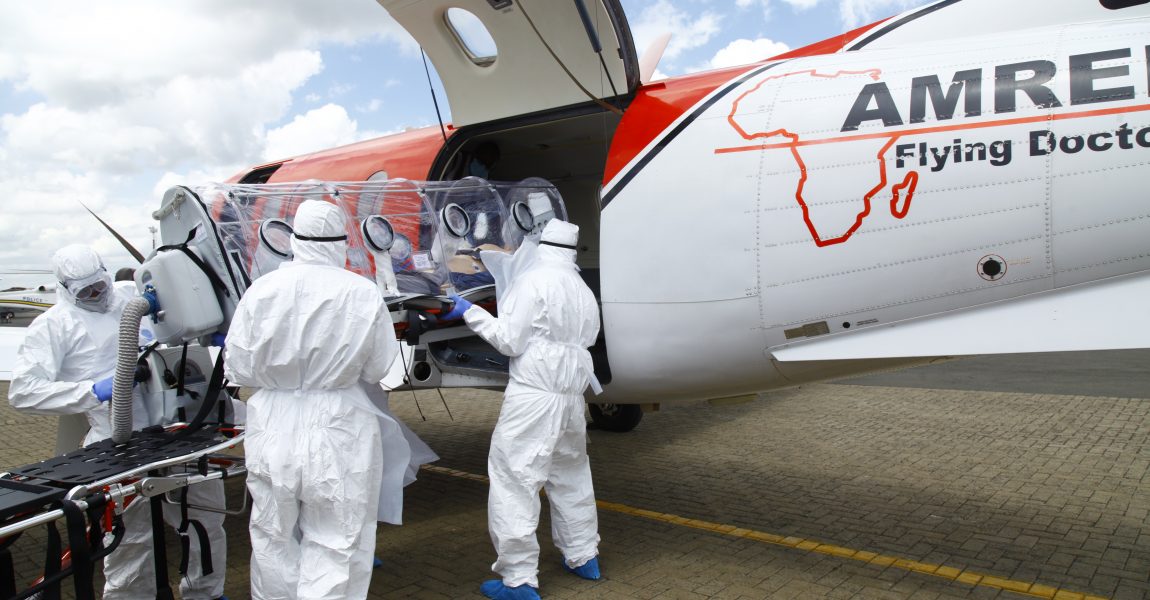 Dr Joseph Lelo, Medical Director of AMREF Flying Doctors, describes an interesting yet challenging double patient evacuation of a mother and child from Moroni, capital city of the Comoros Islands, to Nairobi, Kenya

AMREF Flying Doctors (AFD) recently received a unique request from one of our assistance partners: to transfer a female patient and her four-year-old child – both of whom had Covid-19 symptoms – from the Comoros Islands to Nairobi, Kenya, to enable them to receive a higher level of medical care.

The immediate challenge with this mission was the requirement for two isolation units in the same aircraft, together with the three medical personnel required as per AFD’s procedures for the management of Covid-19 transfers. Consideration and planning were, therefore, key, as it was anticipated that the child could be unco-operative about being transfered in an isolator.

The aircraft chosen for this mission was the Pilatus PC-12, which has a large cargo door suitable for the easy loading and offloading of patients, especially when using the patient isolation unit.

However, the prevailing weather on the island at the time of the mission posed an extra challenge, as it meant there were time limitations on when the mission could be carried out. We also had to factor in the time needed on the ground to stablise the patients, secure them in the isolation units, and load them into the aircraft. The aviation operations team had to review the extra weight of the medical equipment, isolation units and the number of medical personnel necessary for the mission.

Additional medical planning was also done in regards to sedation for the child, with various options identified.

With procedures around working remotely, and with rotational rosters in place for AFD staff, a Zoom meeting was held by the team scheduled to carry out the mission. This included the flight crew and the medical team (two critical care nurses, including one who was a paediatrician, and an experienced anesthetic doctor), as well as the medical director, aeromedical co-ordinator and operations manager.

Although the medical report we received showed the principal patient was fairly stable, the medical team had to prepare for a worst-case-scenario outcome for both patients, which took some rigorous consultation with the medical director and aeromedical co-ordinator. The team ensured that extra oxygen cylinders were carried and safely secured onboard, standard drugs were double-checked in consideration of paediatric dosages for the child, and timelines were reviewed, with alternatives in place in case of operational delays.

The medical flight would take approximately 3.5 hours one way from the Island to Nairobi, with a planned total mission time of 10 hours. In consideration of the changing weather conditions on the island, meticulous planning was imperative to ensure a minimum time on ground with a quick turnaround.

The early morning departure from Nairobi was on time as scheduled; however, the weather on the island was expected to deteriorate later that day, requiring a quick turnaround within set operational timelines in order for the mission to be successfully carried out in one flight-duty period. On landing, the team found that the patients had arrived at the airport and were ready for the pick-up. The flight crew proceeded to refuel the aircraft and plan for the flight back while the medical team attended to the patients.

Fortunately, the patients were found to be in a stable condition and, after a quick brief, the medical team proceeded to don their PPE and then set up the isolation units. The immediate challenge for the medical team became managing the child, who was quite active, and anxious when she saw her mother being put in the isolation unit. Secondly, securing the child in the second isolation unit proved to be difficult even with sedation, as she kept waking up every so often and trying to get out of the unit while crying for her mother. Moreover, local temperatures on the island were soaring, making it very uncomfortable for both patients in the isolation units.

Nevertheless, after successfully loading both patients onboard the aircraft, and after consultation with the medical director back at base, the medical team decided to remove the child from the isolation unit, instead securing him on a chair with a mask close to the mother. The consideration for this was that it was going to be risky to have a deeply sedated child in an isolation unit. As a result of this consideration, the medial team had to remain in full protective gear for the complete duration of the flight.

Having been on ground for more than the two hours planned, the team managed to take off just before the weather closed in on the island. Fortunately, two hours into the flight, the child finally managed to calm down and sleep comfortably until the aircraft arrived in Nairobi.

This mission presented an excellent learning opportunity for the team regarding transporting two Covid-19 patients with two isolation units onboard. Operationally, the mission proved that with the use of a Pilatus PC-12 with its large cargo door, AFD can transport two Covid-19 positive patients using two isolation units onboard one aircraft. The aircraft being configured with a double stretcher system has once again proved to be very versatile in the varied and challenging environments in which AFD operates.

Depending on the flight routing, distance, pick-up and destination locations, meticulous operational planning is required to take into account the weight implications and time restrictions for such a mission. A quick turnaround, if required, would present a serious challenge for the medical team in terms of stabilising the patient, securing them in the isolation units, loading and securing the units in the aircraft before departure. A conservative approach towards planning flights for Covid-19 patients thus continues to be the norm rather than the exception.

Transport of sedated children in isolation units will continue to pose a challenge owing to the risks involved. The primary risk being to the patient in case of sedation requiring airway intervention while inside the isolator, and the secondary risk of infection to the medical team should an emergency intervention be required that would necessitate breaching the isolation unit in order to access the patient’s airway.

Adequate planning and senior medical consultation is the cornerstone of safe medical evacuations, especially in these turbulent times of this coronavirus outbreak. Considerations for safety for all involved must always take priority.