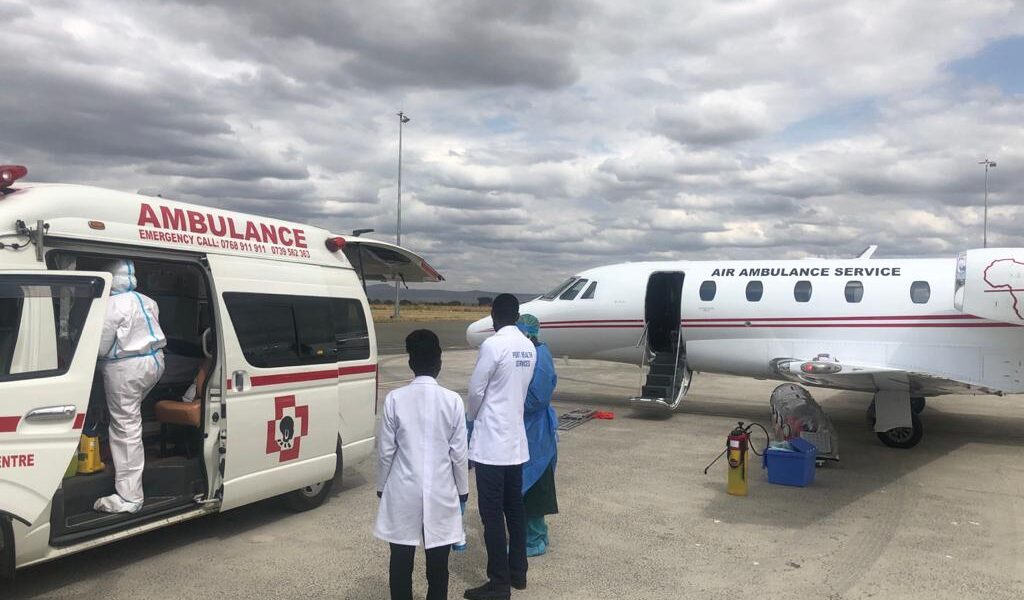 The COVID-19 pandemic obligated different economic spectrums to find new ways to run their businesses. It was no different for AMREF Flying Doctors; we embraced this unique and challenging environment and through it, numerous lessons have been learnt, especially during the development and implementation of our operational processes and procedures for the transfer of COVID-19 patients.

On Tuesday, 15th June 2021, AMREF Flying Doctors was presented with yet another highly complex evacuation case. On this day, our team was to transfer four COVID-19 patients in an unconscious and intubated-ventilated condition, from Kabul, Afghanistan to Nairobi, Kenya.

On Monday 14th June 2021, AMREF Flying Doctors received a call in the middle of the night to transport four patients who had been admitted at a hospital in Kabul, Afghanistan. The patients had exhibited COVID-19 like symptoms and required advanced medical care.

Afghanistan is constantly afflicted by war and conflict that has led to health workers’ severe shortage mainly caused by out-migration, poor and unequal distribution in rural compared with urban settings, and lack of capacities for formal development of professional cadres.

With this in mind, the Kabul team consulted AMREF Flying Doctors to provide medical evacuation services. This could be attributed to the continuous businesses with the Kabul team that have yielded positive feedback in terms of service delivery, even in the outbreak of COVID-19.  We were honoured to be called on for our expertise and proud to be part of the team that was able to transport the patients.

Having had numerous medical evacuation flights to Kabul, it was easier for the operations team to plan the flight. Checking on the availability of the aircraft, our fleet was fully occupied in partaking other missions and therefore the team decided to engage one of our partners in using their aircraft. The team decided to use the Bombardier Dash 8, which has the capacity to carry up to four patients in the isolation chambers together with the aeromedical team.

Basically, on a normal flight when the patient is not critical, the patient is accompanied by one health care assistant. In this mission, two flight nurses and a doctor were to attend to the patients throughout the flight.

On the other hand, the mission’s coverage was estimated to take at least nine hours to Kabul, with the team making at least two tech stops; one at Bososo and the other at Muscat. The team was to take the same duration from Kabul to Nairobi, making the same tech stops. Due to these flight hours, two crew teams would be sent out for the mission.

When the team touched ground in Kabul, they met with the team that brought in the patients in one ambulance. The patients were without oxygen, in respiratory distress and with SpO2s at 80%.  The AMREF Flying Doctors medical team quickly started stabilizing the patients while loading them in the isolation chambers. During the first aid process, one patient stabilized, disapproving the need for an evacuation. The other three patients were then loaded into the aircraft.

After more than four hours of preparing the patients, our team left Kabul for Muscat on Wednesday 16th June 2021, at 10:00 am, where they would make their fast tech stop. At this time, the temperatures in Muscat were extremely high, making it uncomfortable for both the patients and the crew.

Due to the delay in Kabul for patient stabilization, the next fuel stop in Bososo was no longer possible due to early airport closure. Instead, after four hours of negotiation and on the condition that nobody left the aircraft, refuelling was arranged in Djibouti. Used to unexpected circumstances, our medical team was carrying enough oxygen, medical equipment and supplies.

Our team arrived in Nairobi on Thursday at 0230 hours. This was one of the challenging missions our medical team had experienced since the outbreak of COVID-19.  The mission ended successfully, with all patients making a full recovery.