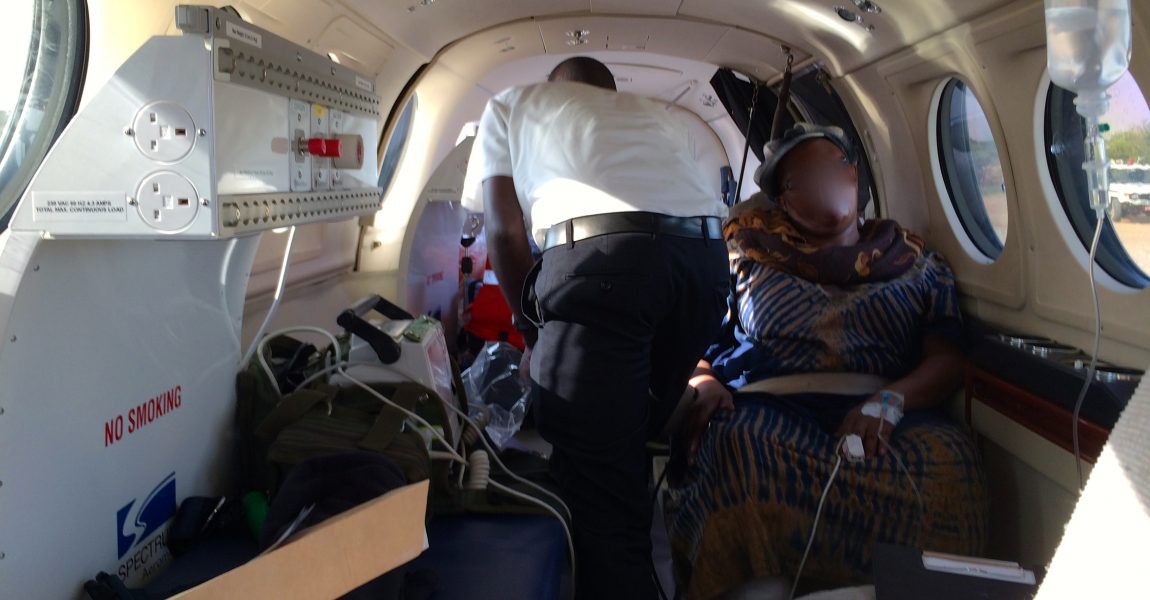 I pushed open the door of our twin-prop Kingair and stepped out into the heat. Dadaab was smoldering in the midday sun and the open, dusty expanse of desert felt like the base of a fire pit. The airstrip was deserted, save for a decaying UN World Food Programme aircraft, its engines missing and windows broken. Scattered thorn bushes clung to the dry red earth, their roots fighting to soak up any last vestiges of water, sheltering deep underground from the devil sun. We waited in the heat, squinting out at the desert landscape through the shimmering air.

Eventually, the ubiquitous Toyota Landcruiser drew up and I climbed into the back. Our patient, a large middle-aged African woman with severe malaria groaned a reply to my Swahili greeting. With difficulty we lifted her into the back of the aircraft, it was hot inside, but mercifully out of the direct sunlight from above. Vital signs showed that she was pyrexial, tachycardic and very dehydrated. An IV line was fixed, fluid administered and oxygen delivered before we started the engines. A blast of air conditioning bathed the cabin and dried the sweat on our brows.

We bumped along the bush airstrip, finally lurching into the air and banking hard left, looking down on the huge UNHCR refugee camp spread out below. Home to a half-million displaced souls, this is largest refugee camp in the world and sits on the desert plane just south of the Somali-Kenyan border. With fluid, oxygen and medication, the patient was beginning to improve during the 1 hour flight back to Nairobi. At Wilson Airport we moved her into the back of our ground ambulance and sped off to Nairobi Hospital where she would receive definitive care.

So ended my first rescue and retrieval mission of this placement with AMREF Flying Doctors (AFD). I had arrived the day before from the cold of a wintery Manchester to spend 3 weeks with my friends at AFD in the run-up to Christmas.

As I write, I’m due to head back to England tomorrow after a busy second stint as a volunteer flight physician. The 14 missions on this trip have covered some 14,000 miles, more than halfway around the globe. We have treated patients ranging in age from 14 months to 68 years. I’ve now flown more than 50 missions for AFD and I’m beginning to feel like part of the furniture. A pale-skinned and reserved Englishman I may be, but when Africa gets in your bones, it stays there…

Today’s evacuation saw us fly out to Voi National Park in a Cessna Caravan. The Kenya Wildlife Service who work in the bush do a difficult job trying to protect the animals from poachers and attempt to mitigate the inevitable conflict between humans wanting more land and animals needing space to live. An unfortunate accident had happened there this morning, a so-called ‘friendly fire’ incident where one of the Rangers had been badly injured in a shooting incident with a colleague. The bullet had entered the left side of his abdomen, passed all of the way through, with a large exit wound on the right. The bullet had finally come to rest in his right forearm. He was in a bad way, with internal bleeding and damaged bowel. He needed to get to the operating theatre urgently so we worked quickly, gaining IV access, administering ketamine analgesia, antibiotics, fluid and oxygen. His wounds were cleaned, packed and pressure dressings applied. He remained fairly stable during the flight, although very sick. After handing over at Karen Hospital he went to theatre and is now on the Intensive Care Unit where I hope he will make a good recovery. 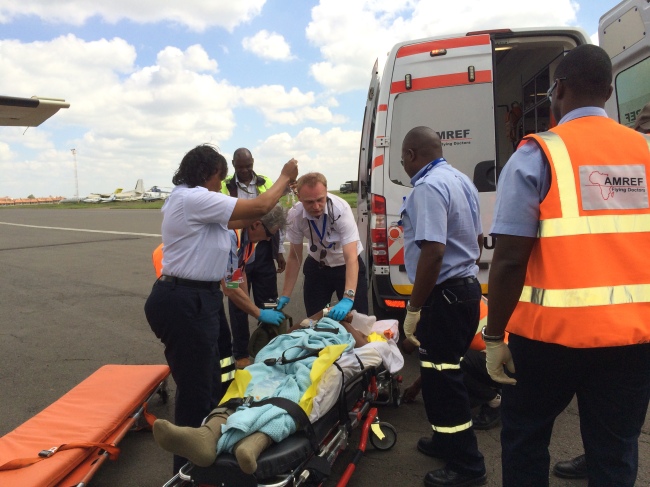 Between those two missions I found myself in Johannesburg during the Mandela memorial, evacuating a man from Tanzania following an acid attack in a bar. I was in the Central African Republic during the outbreak of ethnic violence, and saw hundreds of refugees taking shelter at the airport. We evacuated a Belgian man with a traumatic head injury, but it makes you shake your head at the world when rescuing a single European as we flew over the massed ranks of refugees, living in squalor below.

Other destinations on this trip have included Rwanda, Burundi, Djibouti, Tanzania and various locations around Kenya. I could write a full blog about each but I’m running out of time before flying home and will leave it there for now. It’s been a great 3 weeks and I’m already looking forwards to coming back at some point….

Thanks to all at AFD. You do a great job.