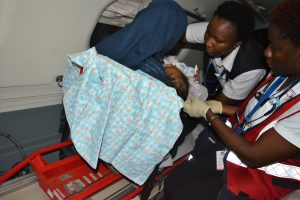 On the afternoon of 28 November 2018, the AMREF Flying Doctors’ Control Centre received a distress call from medical doctors in Lamu requesting the urgent aeromedical evacuation of a two-year-old boy suffering from intestinal obstruction.

The patient had undergone two unsuccessful surgeries at the Lamu County Hospital, with the second resulting in excessive bleeding and other complications.

Following a quick consultation within AMREF Flying Doctors’ management team on the case, the plane took off from Wilson Airport as soon as possible. This young patient required specialised doctors and expertise that wasn’t available in Lamu.

After a one-hour flight, the team landed at the Lamu airstrip. There was a quick transfer of the patient’s relevant medical records to the AMREF Flying Doctors’ medical team, after which the baby was moved from the vehicle into the aircraft for stabilisation.

The team was soon airborne and after a relatively smooth flight during which the little boy was carefully monitored, the team landed back at Wilson Airport where an Advanced Life Support (ALS) ground ambulance waited to take him to Nairobi West Hospital.

Charity evacuations such as these are carried out free of charge. AMREF Flying Doctors is extremely appreciative of all those across the globe who fundraise for us so we can keep doing what we do best – saving lives.

AMREF Flying Doctors was founded on the principle of providing critical medical assistance to patients – mostly in remote parts of Eastern Africa – who are unable to afford it.

AMREF Flying Doctors is extremely appreciative of members of the community across the globe who continuously raise funds in support of the charity evacuation programme, so we can keep doing what we do best – saving lives, irrespective of who is who.
This evacuation was carried out at a cost of US$ 9,845

The inaugural Charity Golf Day tournament in 2018 helped to raise US$ 8029.00 towards the AMREF Flying Doctors Charity evacuation flights.